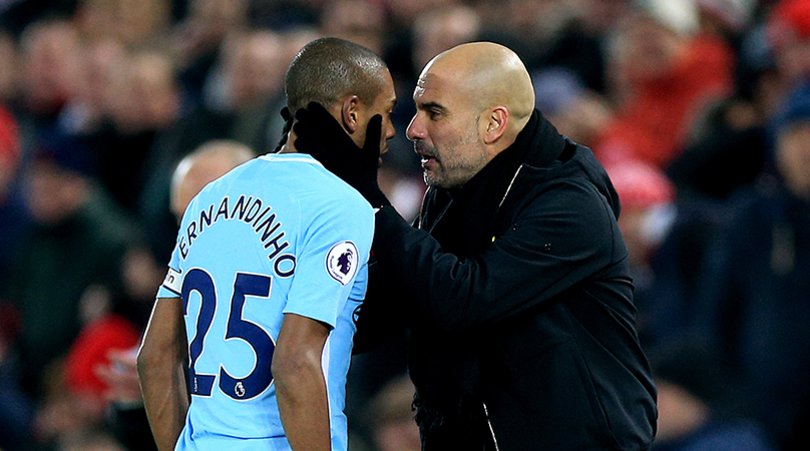 The clock is ticking at Manchester City, not on their time as a trophy-collecting force but on their time to replace maybe the most important cog in the city machine, Fernandinho

The Brazilian Dynamo, now 33, won’t have too many seasons left at the top level and the race is on to find a successor to the defensive midfielder’s throne, City will sincerely miss what he brings to the team and a replacement search is underway.

The Premier League champions seemingly have a world-class alternative in every position apart from the defensive midfield slot occupied by Fernandinho. His part in breaking up plays and starting lightning quick attacks can’t be underestimated and is sorely missed when he is absent from the side. Manager Pep Guardiola has used Fabian Delph and even John Stones in the position to limited success.

So who could City turn to? We look at 3 possible replacements for the Brazilian

The most heavily linked player and with good reason, his displays in the Championship last season were very impressive and it’s thought that City assessed Neves in the summer but was maybe hesitant to pull the trigger and needed to see how he fared in the Premier League this season. Well, his season so far wouldn’t dissuade Pep from thinking he could fit into his incredible side, his passing from midfield and also his ability to read the game and break up play is kin to Fernandinho. Neves is also not shy to shoot from outside the box to devastating effect thus adding another facet to City’s already formidable attack. The Portuguese has experience of the Premier League and also the Champions League in his time with Porto, at 21 he has time to adapt to the role if needed. Neves’ signature will no doubt come with a hefty price tag but Manchester City’s power in the transfer market should be able to make any deal happen.

The French midfielder 22, has caught the eye of every top club in Europe with dazzling displays in Ligue 1 and the Champions League with Lyon, the latter of which saw him come face to face with Manchester City in the group stage where Guardiola had a front row seat to see a possible replacement for the defensive midfield position.

Over the two ties Ndombele was a powerful force in the Lyon midfield, handling his role excellently against the Premier League juggernauts, he moved out of midfield with power and pace, set up chances and was named man of the match by Sky Sports in the 2-2 second fixture. City has been rumoured to have made contact with the French club about a possible move but will need to fight cross-city rivals Manchester United and Italian champions Juventus for the Frenchman’s signature.

Could the heir to Fernandinho be closer to home? 2 young talents on loan at Girona and Hadjuk Split respectively have been highly rated by Guardiola and with the Spaniard’s skill at player development, it could save City a lot of money and time if they could fill the role.

Douglas Luiz 20, joined City from Brazilian Giants Vasco Da Gama last season for £10.8m and was a part of Citys pre-season squad before being sent out on loan to Girona in La Liga due to not being able to gain a work permit Much to Guardiola’s displeasure

“The manager from Brazil [Tite] and myself know more than the guys who decide he is not able to play. I am so sad and disappointed for Douglas because he could help us, play with us. He has shown many good things in training sessions and the reason why we spent a lot of money to buy him [£10.7m] is because he is a player with a huge capacity to play for us.”

Luiz has put in some great displays for Girona, most notably against Real Madrid, his attributes include his physicality and great technical ability along with his reading of the game which makes Douglas a good fit. Should Luiz obtain a work permit Guardiola could give the young Brazilian the chance he will be looking for.

Also in the City ranks is 18-year-old Croatian Ante Palaversa, signed on deadline day in January for £4.3m from Hadjuk Split, the youngster came through the ranks from the youth team at Hadjuk, and is also a Croatian u19 player and captain. At 6″1, size is on his side, he can play in the defensive midfield position and also further forward making him versatile. Ante also has an eye for goal and is strong in the tackle giving the Croatian familiar qualities needed to play the Fernandinho role. Upon being signed in January Palaversa was immediately loaned straight back to Hadjuk Split for the remainder of this season and all of the 2019/20 season so he may be one for the future.

Whoever Manchester City decide to succeed Fernandinho, they have very big shoes to fill, but with Guardiola’s coaching ability and City’s track record in transfers it’s likely they will make the right decision.

One thought on “How to solve a problem like Fernandinho? 3 possible replacements”