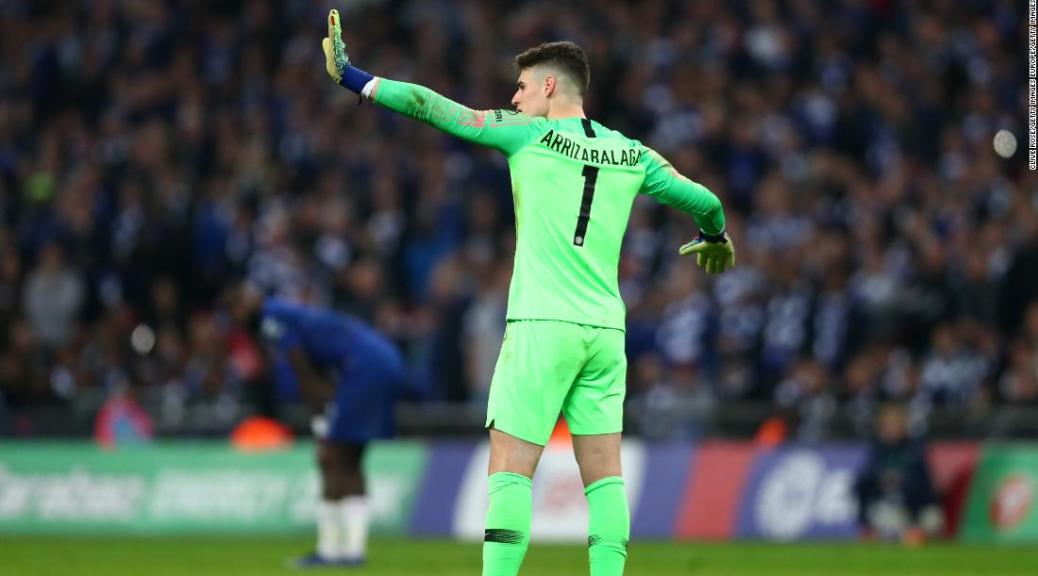 The controversy between Chelsea Goalkeeper Kepa Arrizabalaga and Maurizio Sarri in the Carabao Cup final roles on, with the most expensive goalkeeper in the world refusing to be brought off in the final minutes of extra time who looked to be replaced by Willy Caballero, outraging the Italian. Who then saw his team lose on penalties to a Manchester City side who weeks before, tore his team apart putting six past them at the Etihad. Since the final Kepa has been fined a weeks wages, and told he might be dropped for their midweek game against London rivals spurs. Since this fall out we’re going to look at past rifts between players and managers that have caused controversy in the club.

Almost opposite to the Kepa vs Sarri situation, in this incidence, City Manager Mancini looked to his bench after taking off Erin Dzeko after a poor first half performance, and looked to Carlos Tevez on the bench to come on five minutes after the Bosnian striker was replaced. Tevez then refused to leave the Man City bench after being instructed multiple times by the Italian manager to warm up and get ready. This then escalated into the questioning of the manager, player power and if Tevez wanted to play for the City shirt.

He was later suspended two weeks from the club, fined two weeks wages for breach of contract with a PFA agreement, then went and broke “gross misconduct” rules by flying to his home country Argentina, without permission, he was then fined six weeks wages, which he appealed then fell through and to add insult to injury a loyalty bonus which was given to him prior to the Bayern match in his contract had then been rescinded due to his actions of the field and his multiple transfer requests he handed into the club. It was later calculated that Tevez would have made a loss of £9.3m. He would then later return to the club in February helping them secure their first league title in over forty years from their neighbours Manchester United.

When Pep Guardiola came into Barcelona after replacing Frank Rijkaard in 2008, he wanted to bring the Barcelona philosophy back to the way he played under Johan Cruyff. Coming into a team with players of great talent however maybe not his mindset he believed to be the Barcelona way, the Catalan way of playing football, one of those was Samuel Eto’o. Others like Deco, Ronaldinho and Gianluigi Zambrotta were all sold leaving Eto’o solo knowing that he wasn’t in Pep’s future plans at Barcelona. In an interview he gave after leaving Barcelona in 2014, he corrects the presenter, describing Guardiola as a “good player, not a great player”. He describes times where he was in the changing room, Pep comes in, and then mentions there are going to be some number changes, starting off with Eto’o and Henry, swapping their numbers 14 and 9, which Eto’o described as a lack of respect.

He then goes on to describe how the rift between him and the manager got bigger and bigger to the point where Barca players like Xavi, Iniesta, Messi and Victor Valdes bought them two together without each other knowing to try and force them to get along. Pep also described the way he made attacking runs in training were all wrong, something we know now to this day how precise methodical Guardiola is in every team he has been at. He mentioned that they have both made peace with each other however after Guardiola’s first season in charge, Samuel was out to inter Milan after scoring in his final game for Barcalona in the champions league final against Manchester United. He later went on to become the only player to win back to back trebles with different clubs, with wining the treble with inter the following year with Jose Mourinho.

During their first season together, it was all smiles at old Trafford as the pair never crossed paths, and seen celebrating together in both cup finals united won that year, with Pogba handing the Carabao Cup to his manager to celebrate with the fans and the same with the Europa league which then ended with an emotional hug, a night which was more important than just football with that final in Stockholm if you remember?

However, during the second season is when we start to see the relationship turn, most noticeably during the game against Spurs at Wembley, where pogba and Mourinho are seen almost shouting at each other disagreeing on where each other thinks they should be playing, eventually after play resumed Pogba was then taken off in the defeat to Tottenham, a big talking point in the press. During February, he was left on the bench in a big champions league knock out game against Sevilla which he entered into early due to an injury with Ander Herrera, but the media still question why he was on the bench. Reports came out then that the two weren’t even speaking and were told instructions through assistant manager Rui Faria.

Then eventually with the season ending and the World Cup beginning, we hadn’t seen Paul Pogba at his finest over the past few years in United colours however he reminded us of what he was about at the 2018 World Cup, playing a massive influence in France’s charge to victory. He was applauded by fans but critics suggest why can’t he produce this for at club level? Something that many critics out down to the way Jose played pogba and the restrictions in what he wasn’t allowed to do.

When returning from the World Cup, Pogba was given the vice captaincy, and with club captain Antonio Valencia out, Paul Pogba captained his side in their first two games, a win against Leicester and a loss against Brighton where again his manager criticised him, there were also comments made about his social media posts during a carabao cup match which saw united lose and Mourinho go after him in training the following day. Pogba was subsequently dropped off in Mourinho’s final few games, playing against Valencia in the champions league, but not showing much of his qualities not playing or coming on in games against Fulham or Mourinho’s last game in a 3-1 defeat to Liverpool. Since Ole has entered into the hot seat at Manchester United, Pogba has turned into the player that attracted United to him in the first place, with Solskjaer given the whole team more freedom to express themselves. Which has saw united go unbeaten in the league since Ole has come in.

Finally we get into a story which could link back to our story at the beginning. Chelsea over the years since Russian owner Roman Abramovich has let a lot of managers go at Chelsea, with the Russian wanting instant success at the club or they are just let go, this is the case with AVB (Andre Villas Boas) with the Portuguese manager not lasting a year at Stamford Bridge after Chelsea paid over £13m to lure AVB from Porto to London.

It seemed like at his time at Chelsea, he struggled to gel with the senior players at the club like John Terry, Frank Lampard and Nicholas Anelka, who he subsequently dropped throughout the season. Three of their best players being dropped to the bench wasn’t what the team needed or the fans and both started to become restless with the results not coming through. With a poor start to the year as well and loosing their first champions league knock out round to Napoli with all three key members that I mentioned before not playing apart the manager was subsequently let go due to a poor run of form said the owner. However rumours circulated that player power at Chelsea dumped AVB out of Stamford Bridge with players revolting to the new managers style of tactics. Something of the sorts at Chelsea with players having a massive impact on the managers outcome, with the sacking of Jose Mourinho in his third season after winning the title, and Antonio Conte after the same fate. With players not liking the situation at the club at the moment. Something which the press still holds over the club today. After AVB was sacked, former player Roberto Di Matteo took over and saw an immediate turn in results seeing one of the most successful periods in Chelsea’s history with Di Matteo winning not only the FA Cup but the Champions League beating Bayern Munich on their turf at the Allianz arena.

Looking at the previous acts of Chelsea players, and a stubborn manager, will player power take over, could we have seen it this season with a little rift between Chelsea’s star man, Eden Hazard and now goalkeeper Kepa Arrizabalaga, what could happen next at Chelsea?