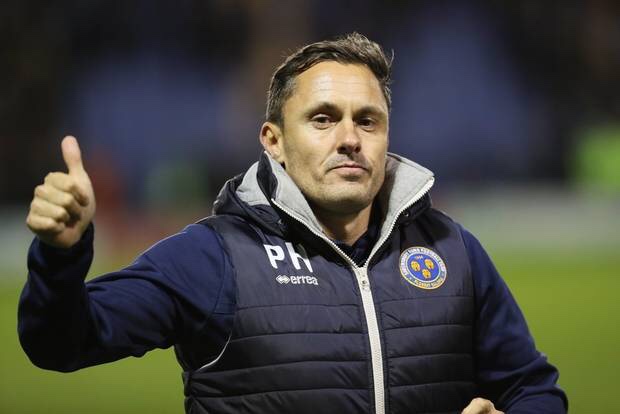 This morning Rochdale announced the departure of manager Keith Hill after the Club had lost 9 of its last 11 league games. Hill had been Rochdale’s longest-serving manager this century and had been with the Dale since January 2013. However, Hill’s time at the Spotland came to an end with Rochdale languishing in 22nd place and 5 points from safety. Under Hill, Rochdale have won two promotions from League 2, one in 2010 in Hill’s first spell and a second promotion from League 2 again in 2014.

However, with Hill’s dismissal, Rochdale needs to find a new manager to guide the club away from relegation and with only 11 games to do so, it’s a hard task for any manager.

So with the tremendous test ahead of the new manager, who are potential candidates to take the Rochdale hot seat?

Paul Hurst
Paul Hurst is the current bookmakers favourite at the time of writing and has been out of work since he was dismissed at Portman Road back in October. The Sheffield born manager has had a prominent rise over the past decade with his first job being the joint manager of Ilkeston town. Since then, the former left-back has managed Boston United where Hurst achieved promotion to Conference North and the Lincolnshire senior shield cup in his first season. Hurst would later resign from Boston in 2011 to join fellow Lincolnshire-based side Grimsby. Hurst spent five years at the Mariners achieving promotion back to the football league in 2016 via the playoffs. Hurst remained in charge of Grimsby till October of 2016 before moving to League One Shrewsbury Town. Hurst guided the Shrews off the bottom of the table and finished the campaign in 18th. The following season Hurst guided Shrewsbury to a playoff place and the Checkatrade trophy final before losing out to Lincoln. After a successful season with the Shrews, Hurst was hired as Mick McCarthy’s replacement at Ipswich Town. Hurst only managed to last 15 games at Portman road before being given the boot after only winning one game.
Hurst would be a great fit for Rochdale with the 44-year-old already having previous experiences of working on a tight budget both at Ipswich and Shrewsbury. Hurst also guided Shrewsbury out of the mire back in 2017 and could do the same again with the Dale.

Steve Evans is another name being thrown

into the ring to be the next Rochdale manager with the Scot being out of work since January. Evans, who has won six promotions during his managerial career, was recently dismissed by Peterborough United after a poor run of form which saw the Posh fail to win three games and lose to fellow promotion contenders Luton (4-0) and Portsmouth (1-0). Evans’ most successful spell was with Yorkshire-based side Rotherham where the former Glaswegian striker achieved back-to-back promotions from League 2 and 1. Evans guided the Millers to England’s second tier for the first time since 2005. Evans would later go on to manage Leeds for half a season before moving to Nottinghamshire-based side Mansfield town in 2016. At the Stags, Evans would guide the club to a 5th placed spot by February, however, would bizarrely resign with the Glaswegian claiming he wanted to go to China. Mansfield accepted Evans’ resignation and stated that “ No individual is bigger than the club”. A day later Evans would join League One side Peterborough United and not the Chinese super league.
With Evans achieving 6 promotions in his career it’s a no brainer to appoint him right? At his last two clubs, Evans has overspent and failed to achieve the targets that were set for him. Furthermore, critics and fans would also be quick to point out his lack of loyalty with the Mansfield resignation saga.

The third and final manager on this list to replace Keith Hill is former Bristol Rovers, Darrell Clarke. Clarke has managed over 400 games as a manager and has built a strong reputation as an astute football manager and will be looking to get back into the game after being dismissed by Bristol Rovers in December 2018. Clark started out his managerial career with Salisbury City where the former winger started life as a player Manager. The Mansfield-born manager went on to achieve two promotions with the Whites before leaving in 2013 to become assistant manager at Bristol Rovers. Clarke wouldn’t become full-time Manager till March 2014 and saw the Gas relegated to the Conference following a 1-0 defeat to Mansfield on the final day of the season. Clarke remained in charge the following season and returned Bristol Rovers back to the Football league on the first time of asking. The following season, Clarke would achieve consecutive promotions with the club as the former winger guided Bristol to a third-place finish in League 2. Clarke would continue to impress at Bristol Rovers finishing 10th and 13th place in League One. However, Clarke left the club in 2019 after a run of 7 defeats in their last ten games.
Clarke would be an excellent choice for the Dale, as the Manager has shown his determination and loyalty at Bristol Rovers whilst working with constraints. Clarke also holds the highest FA coaching badge a level 5 UEFA pro.

Rochdale fans, who do you want to see as your new Manager?