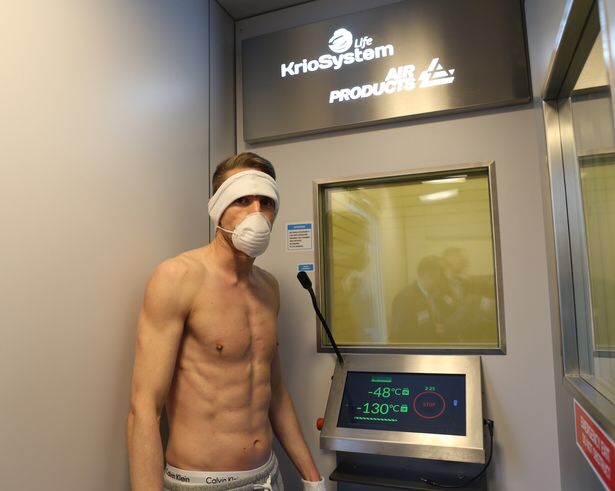 Footballers and athletes of the highest level are constantly looking at ways to prevent injuries and rehabilitate quickly.

Cryotherapy, also known as cold therapy, is a relatively new technique used by professional clubs and physiotherapists in an attempt to maintain an athlete’s performance at the top level. Cryotherapy is done using cold (very cold) temperatures, for either the entire body or localised areas and individual muscles. It is a gruelling ordeal for players not comfortable with cold weather, as temperatures can reach way below freezing, to an excess of -100°c.

The process can be done on different scales, one of the most effective techniques is where the athlete can stand in a ‘Cryotherapy Chamber’. Liquid nitrogen is commonly used to provide the extreme conditions, where their entire body is exposed to sub-zero temperatures for various amounts of time. Or alternatively target individual muscles for more distinct pains, with compression like garments. Due to the strenuous exercise footballers do, it is common for them to use the garment like procedure on their legs after training or matches.

The theory is that the sub-zero temperatures restrict blood flow to the targeted areas, aiming to reduce pain and inflammation the athlete may feel. The athlete would remain in the chamber for around 3 minutes, and blood flow would be redistributed to the core of the body to protect the organs from the cold. Upon exiting the chamber, blood with a high oxygen concentration returns to the arms and legs, aiming to flood and heal the damaged cells around the body.

There are various associated benefits with the use of cryotherapy, obviously the main being pain relief and muscle healing. You may wonder what the fuss is about, why can’t footballer’s and athletes just rest and have a massage? The extreme technique is said to have much faster effects than these, with athletes saying that the effects are almost instant; allowing them to train harder for longer and improve their performance. Cryotherapy is said to also support the process of weight loss, as the body is working much harder than normal in order to stay warm. More energy is being used, and therefore in theory more calories are being burnt.

Some studies however have proven that other techniques are more efficient in the mitigation of muscle pains, such as water therapy and sports massages. Most of the studies on cryotherapy haven’t been done on humans (for obvious reasons…), therefore there isn’t sufficient evidence to necessarily prove that cryotherapy works for people. A 2015 Cochrane Review looked at four different studies and concluded that the technique provided no significant benefits to performers.

If you could, would you try cryotherapy?

One thought on “Fact or Fiction, Does Cryotherapy Really Work?”