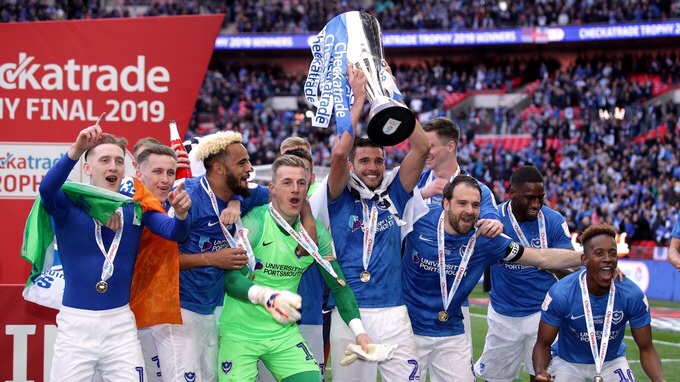 It was Portsmouth who won a pulsating Checkatrade Trophy Final at Wembley Yesterday, played in front of over 85,000 fans- a record for a game in this competition played at Wembley.

The stadium was bouncing with noise made by the two travelling contingents, however in singing terms, the Blue Army out sang the Black Cats.

The first half saw Sunderland, playing towards the Pompey fans housed behind the West End Goal as well as the North and South Stand, dominate proceedings for the first 45 minutes, taking the lead, with an Aiden McGeady free kick in the 38th Minute, a goal which sent the Black Cats supporters into euphoria.

In the second half, Portsmouth, now playing towards their fans, upped thier game and started bossing the midfield area, after struggling in first half, the began to create good chances, with skipper Pitman hitting the post, before Nathan Thompson headed home a deserved equaliser in the 84th minute to send the blue army into raptures and the game into Extra Time.

As Extra time got underway, both teams carried on creating chances, with Portsmouth having the better of them, despite some obviously tired legs. In the 114th Minute, Jamal Lowe found himself in a great posistion on the edge of the Sunderland Box, with the goalkeeper advancing, and lobbed the goalkeeper with a neat precise shot, which saw the ball hit the back of the net to give Pompey a 2-1 advantage.

Could they hold on?… Sunderland came back with a vengance, but creating very little, until the 119th Minute, when Aiden McGeady fashioned an opportunity in the Pompey box, with several players, not wanting to make the tackle for fear of giving away a penalty and his shot, scrambled over the line, despite frantic Pompey efforts to clear it

Shortly after the Final Whistle Sounded

Pompey scored all their spot kicks and Sunderland missed one with Lee Cattermole’s penalty was saved by MacGillivray. A great final 45 minutes and extra time helped Portsmouth end up being crowned Checkatrade Trophy Winners and fully deserved it was as well.