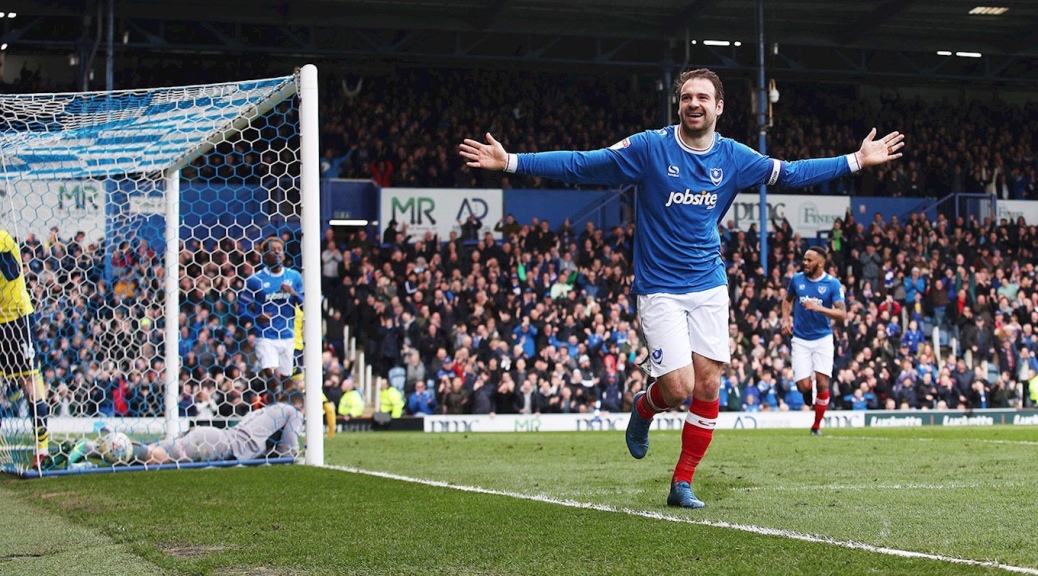 Portsmouth took a step closer to automatic promotion with a 2~1 win away to Burton Albion at the Pirelli Stadium, this afternoon.

In a game which was covered live by Sky Sports,neither side, created anything of real note, though perhaps Portsmouth had the slight edge of the two teams and once they had settled down, took the lead with a good goal, from Ben Thompson, that was worthy of winning any game, let alone one with so much bearing on the top two places of EFL.

The second half saw Burton come out and start much brighter, playing a higher line, that gives the opposition more problems and as a result they equalised within  a minute or so of the re~start, after Portsmouth Switched off on the left hand side of their defence and subsequently in the Middle as well, leading to Liam Boyce scoring a goal which made the scores level.

Much as they tried to respond, Portsmouth were making too many wrong decisions which nearly cost them on more than one occassion, but they managed to ride the storm.

Meanwhile at the other end of the pitch, Brett Pitman and Ollie Hawkins, despite a lot of effort, were not reaping any sufficient rewards and as such were substituted, being replaced by Bryn Morris and Omar Bogle respectively.

Neither substitution immediately paid much dividend, until the Introduction of Ronan Curtis for Gareth Evans, much to the disappointment of Evans, who til that point had had a steady if not brilliant game.

Curtis made a good impact and gave Portsmouth something different up front and they created slightly more in the way of chances, but they couldn’t make the breakthrough.

That all changed in the very last minute when a cross from the left hand side, fell to Ben Thompson, who with a slice of good fortune and a dubious handball decision which went in his favour  managed to get the ball to Matt Clarke, the centre half, who smashed the ball home from a close angle, to the delight of the travelling pompey support behind the goal and to the horror of the Burton players, who to a man protested strongly, but to no avail.

The goal Stood and the game finished soon after

The result leaves Portsmouth in 4th place now, as a result of Sunderlands win at the stadium of Light over Doncaster, but more importantly than that are just 4 points off the top spot given the way the other results in and around them have gone today.

Monday sees them take on Conventry City in font of a packed Fratton Park.

A win there, and who knows?