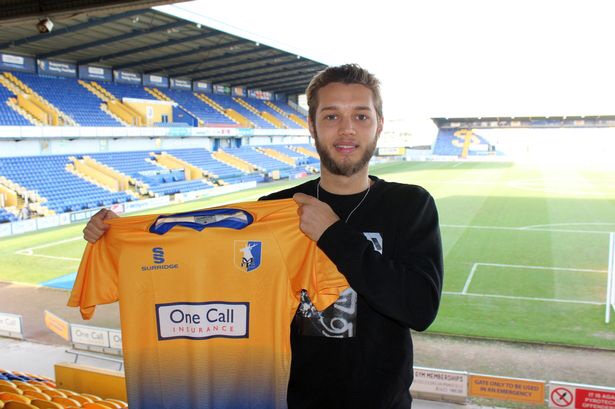 When Jorge Grant signed for the Stags back in January on a loan deal till the end of the season, the transfer was met with much praise from Mansfield fans and left other League Two clubs envious of the shrewd business that the Nottinghamshire-based side had done to acquire the talents of Grant. However, after four months at the club, it appears Grant has split options at the One Call Stadium with some fans smitten by his skillful on-the-ball ability and dead-ball prowess. On the other hand, some of the Mansfield faithful have questioned his commitment and attitude towards playing for the Stags.

Grant joined Mansfield back in January on a loan deal until the end of the season from fellow Nottinghamshire-based club, Nottingham Forest. Grant had started the season out on loan at newly promoted Luton Town. However, after failing to establish a first-team spot in Nathan Jones’ side, Grant was recalled back to Forest who wanted to send the 24-year-old attacking midfield out on loan to gain key crucial game time.

Mansfield, along with a plethora of other suitors in both League One and Two, wanted to sign the midfielder, however Mansfield acted swiftly to secure the signing. The Stags also had the help of another Forest loanee and friend of Jorge Grant, Tyler Walker. Walker convinced the Banbury born midfielder to sign for the Stags and it seemed to fans and pundits that this could be the golden combination to help Mansfield achieve promotion to League One.

The first few games for Grant were stupendous with the attacking midfielder showing his range of talents that he has at his disposal. In Grant’s first five games for the Stags, the on-loan Forest midfielder contributed to six goals. (4 goals & 2 assists) Fans couldn’t believe their eyes and felt Grant was the missing piece in the Mansfield promotion puzzle.

However, after a tremendous start, Grant would fail to provide a goal or an assist for 533 minutes of football and would see an increasing amount of criticism head his way. Grant eventually broke his dry spell with a corner ball that found the head of EFL team of the season member Krystian Pearce. However, Grant’s game wasn’t remembered for his assist rather for throwing a childlike strop as he was substituted after 59 minutes.

But why has Grant failed to fit in at Mansfield? It appears that Grant is a highly talented individual who has the ability to turn a game on its head however it appears Grant doesn’t fit in the Mansfield system when playing better quality opponents. Under David Flitcroft, Mansfield have played a 3-5-2 system or a 3-4-1-2. In this system, Grant plays the furthest forward midfielder who drifts wide allowing wingbacks to cut inside and allowing midfielders Bishop and Mellis space to run into.

This system when playing an inferior opponent suits Grant to a tee with the midfielder allowed a free role allowing him to find space and time on the ball. However, when playing a higher class opponent or one that overloads the midfield similar to the tactics adopted by Oldham on Easter Monday, it means Grant has to track back and drop back into a flatter midfield three.

Grant has struggled to do this job. It just doesn’t suit his play style and leads to Mansfield being overrun in the middle of the park and the Stags being forced to carry a man for large parts of the game. If David Flitcroft wants to accommodate Grant into his side he would have to change from the reliable 3-5-2 and 3-4-1-2 that he has used all season and play Grant in either a left or right midfield role that Grant is much more accustomed to playing.

Case in point last season, the Banbury born midfielder racked up an impressive 19 goals and 9 assists playing for local rivals Notts County. During his loan spell with the Magpies Grant was deployed predominantly on the left side of midfield but also being used on the right.

With a wider role, Grant’s defensive responsibilities were reduced meaning he could concentrate on his attacking output however some County fans did question his effort during games starting at times that Grant was reluctant to track back.

It’s clear to see Grant is a highly talented individual who can enthrall fans with his ability but lacks the correct attitude and defensive abilities to play in certain systems.

Why do you think Jorge Grant has failed at Mansfield?