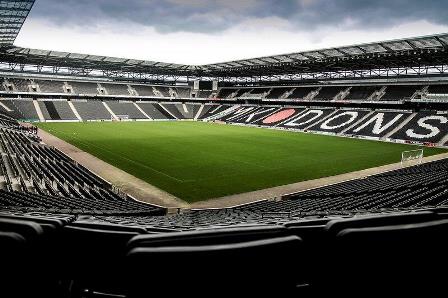 This is the story of MK Dons and how they came into existence, which may surprise you, especially if you are a reader of younger years and just know the team as being

You see back in 2003, a 3 man FA Commission gave, the then badly struggling and original Wimbledon FC, permission to relocate from their temporary ground share with near neighbours and South London Rivals Crystal Palace up the motorway to a new purpose built home, on the outskirts of Milton Keynes, called Denbigh That purpose built home is Stadium:MK

But how they got there, the actual story, behind the story is one most people are not aware of, this explains that In 1991, as a result of the findings published by the Taylor Report, commissioned as a result of the dreadful Hillsborough tragedy in 1989, it was recommended that all then Premiership Clubs, should convert their stadiums to All seater stadiums, so that a repeat of what happened at Hillsborough, didn’t occur again The report stated that these measures should be in place by August 1994 Wimbledon at the time, were in the Premier League and playing at their very cramped and essentially poorly equipped ground at Plough Lane, which due to the land it was built on, meant that it was not able to be developed to comply with the findings of the Taylor Report and so they were forced to look for alternative temporary accomdation, which because of their status as a Premier League club, had to be a stadium which complied with the Taylor Report Findings Because of Wimbledon’s links with Crystal Palace at that time, Selhurst Park as a viable and as it turned out only alternative, was the venue chosen to play home matches.

This was much to the dismay of the supporters and was only meant to be a temporary home, while a new ground was sourced within Merton So in 1991, Wimbledon moved to Selhurst Park Their then chairman Sam Hamman, attempted to work with Merton Council in sourcing a new ground within the borough of Merton, but this turned out to be disastourous, given his incredible and outlandish demands for the new ground Supporters who were not happy at playing at Crystal Palace, showed their disgust, by staying away in their droves and from Playing in front of crowds of 4,000 fans at Plough Lane, found themselves at one point playing in front of a crowd of just over 1,500 at Crystal Palace Sam Hamman meanwhile, frustrated in what he saw as obstructive measures by Merton Council, decided to cut his already massive losses and Sell Wimbledon to a Norwegian Group, who ironically at the time had a major stake in a certain team in Norway called Molde, yes the very same Molde who Ole Gunnar Solskajer managed they had a blueprint, which they intended to adopt with Wimbledon and repeat the process with them, by turning them into a going concern.

They also recognised, through constructive discussions with Merton Council and other parties that Wimbledon needed a ground of their own for this to happen various mergers were muted, including a relocation to Dublin, which was not allowed or permitted within FA rules and so against a backdrop of a fairly successful small team, doing well in the Premier League, despite being forced to sell their entire team, without replacing them, Wimbledon were coming perilously close to going out of business at this point, that Pete Winkleman, whose Inter MK group, had planning permission to build a Football stadium in Milton Keynes, put forward proposals to the then Wimbledon board, suggesting that the club move to Milton Keynes, or face the very real possibility of going out of business.Though this proposal created incredible resentment with the fans of Wimbledon, it was turning out to be the only real viable conclusion for the club.

It was a move that had first been sounded out, way back in 1977… Yes the year that Wimbledon entered the football league, from Non League and had Ron Noades as their chairman now love him or hate him, he was a businessman and a very good one at that, who recognised that though Wimbledon had done well to get into the league, had a very cramped ground, which was limited in how it could be developed, he was looking at other options even then and because he had links to Milton Keynes, through a now-defunct non league club called Milton Keynes City, Milton Keynes was identified then as a potential area that the club would move to. However at the time it didn’t happen but fast forward to the present day and the move was destined to happen initially the FA blocked the move, because it wasn’t in the wider interests of football, but Wimbledon’s board appealed against this, saying that by blocking the move, it would cause a restraint of trade and the club would go out of business, so in 2003, the 3 man FA Commission voted by 2~1 to let Wimbledon FC move to Milton Keynes, on the proviso that any potential or future name change, should incorporate part of the Wimbledon name This was also ironical, because many, many years earlier, Arsenal, had done exactly the same thing, when known as Woolwich Arsenal and moved from South London to North London, without  a murmur, due to the exact same situation hence the name MK Dons, or Milton Keynes Dons came about

And that is the story and history of MK Dons.