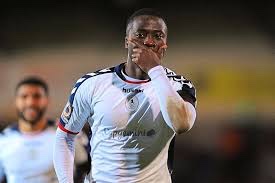 Daniel Udoh…  Daniel Who? Daniel Udoh is the star striker currently plying his trade for

Udoh, was born in Nigeria and has shown good promise with his all round game, since joining Telford. His 26 goals have come in 46 appearances, which is better than 1 in two and would be the envy of any of the top strikers.

Shrewsbury Town, managed by Sam Ricketts, are the current front runners and favourites to secure his signature.

Should this happen, then it would mean a return to league football, for Udoh, who was a member of the famed Crewe Alexander academy and made 15 appearances in Leagues 1&  2 for the railwaymen before he was released last summer.

However the links between the two clubs, who are not far apart geographically, is not renowned, though Sam Ricketts the Shrews boss, once played for Telford in their previous guise

So with Udoh being out of contract this summer, could it be that he will be plying his trade at a higher level. If that is the case, then Telford would receive some nice compensation