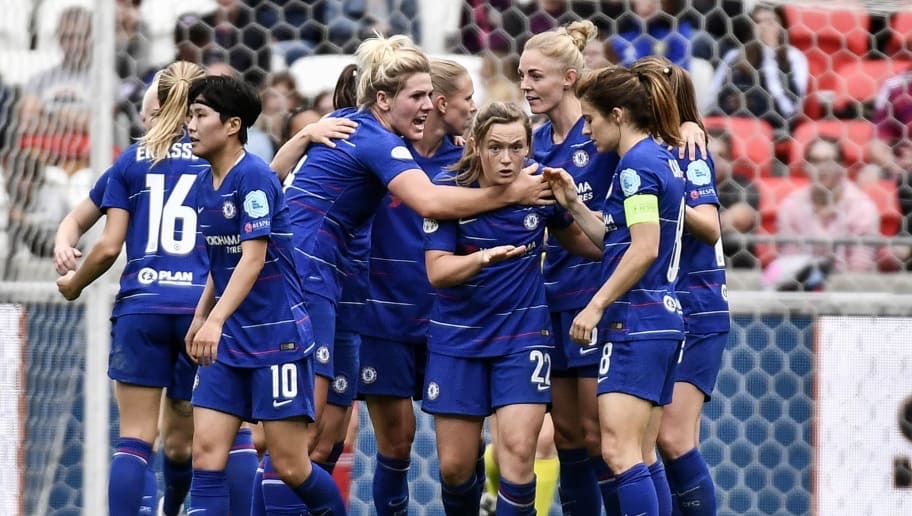 Emma Hayes’ Chelsea inflicted reigning champions Arsenal’s first defeat of the season in front of a 4,149 crowd at The Cherry Red Record Stadium. This resulted in the Blues moving above the Gunners to second in the table, following their 2-1 win.

The league leaders, Manchester City, meanwhile continued their impressive start to the campaign with a 3-0 win over Birmingham City.

Elsewhere, Manchester United secured their first away win in the Women Super League with a comfortable 3-0 win at Tottenham Hotspur’s Hive Stadium, while Reading triumphed over Everton in a 3-2 thriller.

The weekend’s final two contests saw West Ham win 3-1 against Hope Powell’s Brighton side on the South Coast and Liverpool gained their first point of the campaign as they drew 1-1 with fellow strugglers Bristol City.

The Blues secure crucial win in the London Derby

It was Chelsea who emerged triumphant in an absorbing contest with title rivals Arsenal.

The Gunners got the better of the early exchanges and took the lead in the ninth minute through Danielle van de Donk.  The Dutch midfielder scored her third goal of the season, following a quality through ball from star striker Vivianne Miedema.

The Blues however gradually improved and equalised shortly after half time through in form striker and last season’s top scorer, Beth England, who tapped in fellow England international, Fran Kirby’s cut back.

Both sides had chances to win the match but it was substitute defender Maria Thorisdottir, who curled in the late winner, five minutes from time to ensure that the home side emerged with the victory.

City continue to set the early pace in WSL

Manchester City meanwhile continued their 100 per cent winning start to the season following a convincing 3-0 victory over midlands side Birmingham City. The pace setters are still to concede a goal in their four league matches in this campaign.

England midfielder Keira Walsh put the home team in front through a deflected strike in the 27thminute.

Belgium’s Tessa Wullaert then turned in Janine Beckie’s cross just after half time to double the hosts’ advantage and the scoring was rounded off by substitute South Korean forward Lee Geum-min.

United made two wins on the spin

United opened the scoring through Kirsty Hanson’s deflected strike in the 13thminute, before Leah Galton’s cross was turned in by Tottenham defender Ashleigh Neville, to double the Manchester side’s advantage shortly after half-time.

Manchester United’s striker, Lauren James was then sent off for a second yellow in the last minute of normal time, however United still managed to add a third goal through substitute Jane Ross to secure the points.

The Royals emerged victorious in a five-goal blockbuster

Reading’s Fara Williams played a key role in the Royals’ 3-2 victory over Everton.

The experienced England midfielder assisted all three of the Royals’ goals from set pieces; Jade Moore scored two of them while Lisa-Marie Utland headed in the winner from a corner midway through the second half.

West Ham United bounced back from their disappointing loss to London rivals Tottenham with a convincing 3-1 win over Brighton.

The goals were scored by summer signing Martha Thomas, a penalty from their French midfielder Kenza Dali and youngster Alisha Lehmann scored the third. Megan Connolly provided the late consolation for the hosts.

Liverpool meanwhile scored their first league of the season as they came from behind to draw against Bristol City; Ebony Salmon had given the West-Country club the lead before Mel Lawley slotted home a penalty 18 minutes from the end.

The featured contest for game week round five sees another battle between two title contenders as Arsenal host Manchester City at Meadow Park, a game that can be viewed on BT Sport from 2:30pm.

Manchester United will be aiming to make it three wins in a row when they host Reading, elsewhere Everton will look to return to winning ways when they host struggling Brighton.

Dates of next WSL Fixtures