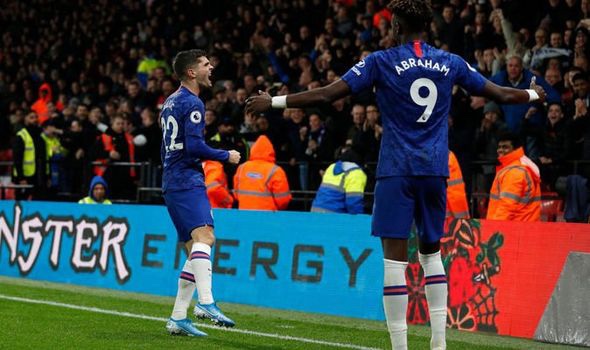 Frank Lampard and Chelsea were able to stretch their winning streak in the Premier League to five games after a 2-1 victory against Watford at Vicarage Road on November 2nd.

Chelsea got off to a hot start as Tammy Abraham struck a right footed shot from the center of the box thanks to a through ball from Jorginho. This goal for Abraham tied him among the Premier League leaders in scoring this season with nine, with a whopping seven of his strikes coming away from Stamford Bridge, which is top in the league.

The game started to die down for the Blues and Watford were able to catch up. However, Chelsea did have a few opportunities to score before goalkeeper Ben Foster made four saves before halftime. The opportunities for Chelsea that were saved by Foster came in the 18th minute from a right footed shot from Tammy Abraham, a 19th minute header from a Christian Pulisic header off of a corner kick from Willian, a left footed shot from Willian in the 30th minute, and a right footed shot from Mason Mount in the 43rd minute. A somewhat busy half for the English Shot-stopper.

After halftime, Chelsea had a great chance right off the gate to increase their advantage through a Mason Mount left footed shot, but Foster was there to save the Hornets from a two-goal deficit. However, the Blues were able to capitalize in the 55th minute after Christian Pulisic’s fourth goal in the last two league games courtesy of a pass from in-form Abraham.

Foster continued his great performance in goal, making three more saves to keep Watford in the game. The English goalkeeper had saved shots from Pulisic in the 55th minute, Kovacic in the 62nd minute, and Mount in the 73rdminute as he accumulated eight saves in the loss.

Watford came back after falling down 2-0 thanks to a controversial penalty call. After match referee Anthony Taylor had ruled a no call on Jorginho’s challenge on Gerard Deulofeu, VAR referee Mike Dean ruled it a penalty. Deulofeu was able to score from the spot in the 80th minute as the Hornets were only down by a goal.

The Hornets had a chance to get a point from this match in the seventh minute of extra time thanks to a header from a surprise candidate – Foster- but Kepa Arrizabalaga saved the shot from entering the right corner. The save ultimately saved Chelsea from suffering a heartbreak and sealed another three points for Lampard’s team.

Chelsea will look to continue their strong form on November 9th at home against Crystal Palace. Meanwhile, Watford, who remain the only winless squad among the top 5 leagues in Europe, will face off against Norwich City on November 8 at Carrow Road.