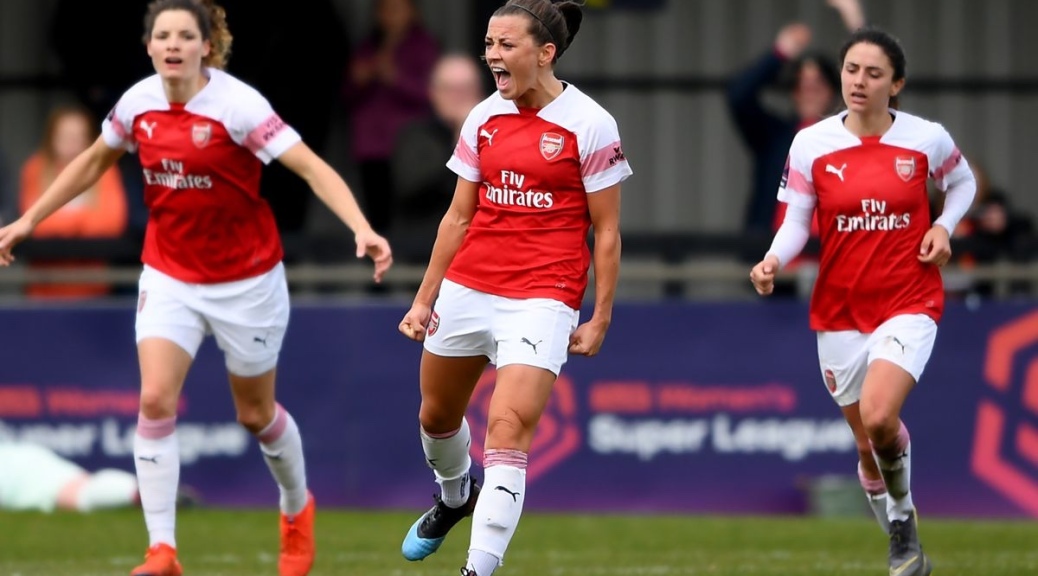 Chelsea defeat title rivals, Arsenal return to the top of the table and teenager Lauren James fires United to victory

Manchester City’s England midfielder, Caroline Weir had opened the scoring for Nick Cushing’s team, volleying in Keira Walsh’s cross.  The Blues top scorer Beth England equalised in the 79thminute, heading in a rebound after Ji So-Yun’s effort was palmed away by Manchester City goalkeeper, Ellie Roebuck. Three minutes later England turned provider as she set up Norwegian midfielder, Maren Mjelde for what proved to be the winner.

This was the Blues first Super League success over Manchester City since July 2014, since then there have been five defeats and five draws for the West London side.

The Champions, Arsenal meanwhile secured a comfortable 3-0 over Reading.  Vivianne Miedema continued where she left off against Bristol City last week as she scored twice, either side of brilliant looping volley from the Gunners captain, Kim Little.

Niamh Charles scored the reds first goal from open play to earn a second point for Vicky Jepson’s team this season.  Canadian forward, Adriana Leon had opened the scoring for West Ham in the first half before Charles equalised to ensure the match finished 1-1.

Elsewhere Tottenham secured a 1-0 victory against Hope Powell’s Brighton thanks to a Victoria Williams own goal and goals from Lucy Whipp and Abbi Grant ensured a 2-0 for Birmingham at Bristol City.

Manchester City will be looking to bounce back from their disappointment at Chelsea last time out.  Nick Cushing’s team have yet to concede a goal at home this season and have also won both their encounters with the seagulls last season.  Brighton meanwhile is still to win away in this WSL campaign, so the signs do not look good for Hope Powell’s team.

We predict that the Manchester club get back on the winning trail and will score a few goals in the process.

The Gunners head into this encounter having scored 14 goals in their past two games, against Bristol City and Reading. They also have a good record against the Toffees having won all four of their Super League meetings, including a 4-0 win in the corresponding fixture last season.

Following a strong start to their WSL campaign Everton’s form has been very up and down in recent weeks. The Toffees defence will also have the unenviable task of trying to keep prolific Dutch striker, Vivianne Miedema, who has scored eight goals in her past two WSL matches.

Everton will prove a tougher opposition for the defending champions however ultimately we think they will get the win.

The Royals have struggled in front of their own fans this season and have only managed one win at home all season in the WSL that was against Everton back in October.  Tottenham meanwhile got back to winning ways last time out but have only won twice away in the league in this campaign.  The only previous meeting between the sides ended in a 4-0 Tottenham win.

Both of these sides are very closely matched in terms of league position, we reckon that Spurs will just about edge this one.

In terms of performances, Vicky Jepson’s side have been steadily improving in the past few weeks.  The reds got a draw last week and only lost 1-0 against the other two title contenders, Arsenal and Manchester City in the last few weeks.

Chelsea meanwhile picked up a huge win against Manchester City last week and has still yet to lose a game in the WSL this season. The out look for the Merseyside club in terms of the head to head with Emma Hayes’ team does look bleak as they have lost all seven encounters between the two teams.

Despite Liverpool’s recent improvement we can’t see anything other than another Chelsea win to keep their unbeaten record in the league intact.

The Blues picked up an important victory last week against Bristol City to end a run of four games without a win.  Manchester United also picked up three points as well to continue their impressive WSL home form, where they have only lost once at home all season.

Casey Stoney’s form on the road however has been less impressive, they have lost their last two away games against West Ham and Chelsea.  This is the first time these sides have met in the WSL.

We reckon this will be another close game with the Red Devils ultimately coming away with the three points.

The out of form Robins head into this game on the back of four consecutive defeats, three of those defeats were by five goals or more, two against Arsenal 11-1 and 7-0 and one against Manchester City, 5-0.

The Hammers meanwhile head into this game in slightly better form having drawn 1-1 against Liverpool in their last match.  They also did the league double over the West Midlands club last season that included a 2-1 win in the corresponding fixture back in April of this year.

We predict it will be another difficult afternoon for Bristol City.