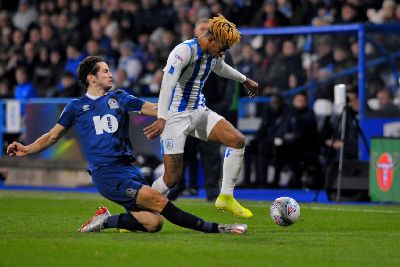 A fixture which has seen more draws in the last few years than an other score-line, fans on both sides would have been hopeful for more than just a point a piece.

Following this weeks news of star striker Bradley Dack being ruled out for the season due to injury, a heavy weight laid upon a Blackburn side who were looking to continue their unbeaten run dating back to 9th November. For Huddersfield, Danny Cowley made two changes to the Boxing Day starting line up which included the return of left back Jaden Brown who came in to replace Flo Hadergjonajat.

As expected, the beginning stages saw both teams very open in defence with both sides having chances in the primary stages. Danny Graham was the first to capitalise one of these chances for the visitors as he headed past Grabara, leaving the Huddersfield players to simply watch as he nodded down to the near post. Up at the other end shortly after referee Andy Woolmer waved away penalty claims as Karlan Grant was brought to ground in the penalty area. Woolmer was keeping the game flowing choosing not to be disciplinary with cards where other officials might have been during the first half.

Shortly before half time a whipped in free kick from Juninho Bacuna reached six yard box to be met by Town’s centre half Jon Gorenc Stankovic who recorded his home turf debut goal with a bullet header to make it 1-1. Stankovic arguably Huddersfield’s best player of the day was up against Blackburn’s Sam Gallagher who caused problems for the home side on multiple occasions, a great contest to watch throughout the 90 minutes.

It was Huddersfield who fought back in the second half to take the lead through a skilled strike from Steve Mounie who, from middle distance, struck the ball into the top right hand corner of the Blackburn net in the latter quarter of the game. A good strike which turned out to be the winner for the Terriers, however this wasn’t before Huddersfield’s keeper Grabara was needed to pull off a close range save to deny Rovers an equaliser.

Nine minutes added on for injury time led to a majority nervous atmosphere at the John Smiths but the home side managed to cling on to their one goal advantage. A good game of football from both sides with some real glimpses of talent in youth players from John Buckley for Rovers who showed intent to get the ball forward and supply his strikers. Similarly, Lewis O’Brien who balanced maturity and desire to attack well, stepping up to replace the injured Jonathon Hogg.