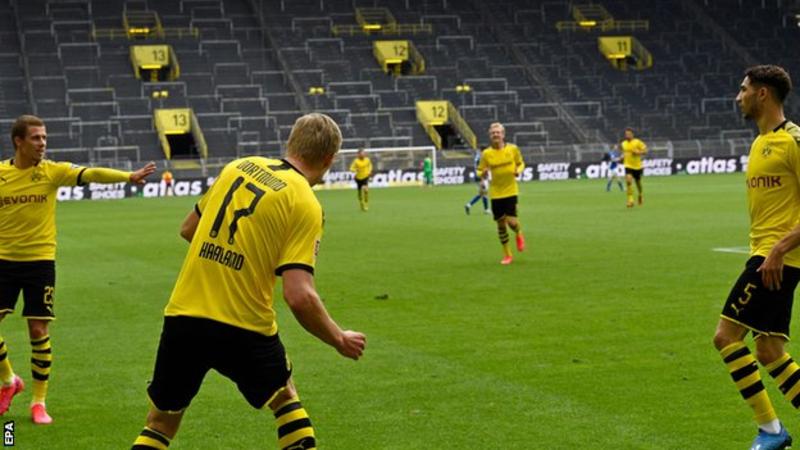 The eyes of the football world were on Germany when the Bundesliga returned to action on Saturday.It became the first major league to return since football was suspended because of the coronavirus pandemic, with six fixtures on Saturday and a further two matches due to be played on Sunday. All games were played under heavy precautions laid out by the German Football League. A strict hygiene and safety protocol, including the ban of crowds, was necessary to get the go-ahead from political authorities.

Erling Braut Haaland scored for Borussia Dortmund as they marked the return of the Bundesliga during the coronavirus outbreak with a convincing derby win over Schalke. There was an eerie atmosphere at Dortmund’s iconic Signal Iduna Park stadium, with every shout by players or coaches audible, and social distancing protocol followed by substitutes and during goal celebrations.

There was a surprise in the Dortmund line up as English starlet Jadon Sancho was only on the substitutes bench. The Match started slowly with Schalke being the more aggressive early on, however it did not take long for Dortmund to take control. Haaland opened the scoring with a trademark cool finish, flicking home Thorgen Hazard’s cross to continue his sensational season, In the build up Julian Brandt pulled of a delightful touch to release Hazard,

Raphael Guerreiro added two more goals and Hazard also found the net as Dortmund went on to claim a comfortable win over their near neighbours and move within a point of leaders Bayern Munich, who play on Sunday.

In the days most interesting and dramatic matches of the day, title contenders RB Leipzig were held to a 1-1 draw by Freiburg. Freiburg took the lead after 34 minutes from a poorly defended corner by Vincenzo Grifo which was put in by Manuel Guide.

Leipzeg had most of the play throughout the match with a total of 22 shots on goals, there best chance shortly after the break when half time substitute and former Everton player Ademola Lookman was left unmarked and completely free but miskicked. Leipzig had more chances but Freiburg were defending very well. They found their equalizer after 77 minutes through Yussuf Poulsen’s header. It could have turned out worse for RB as Freiburg thought they had won it when Robin Koch headed home a free-kick, but the VAR correctly ruled the goal out for offside, football is back and so is the drama of VAR.

The dropped points mena Leipzig are four points behind Bayern Munich who have a game in hand and three behind Dortmund, they’ve also been overtaken by Borussia Mönchengladbach.

One thought on “Bundesliga marks return of professional football”