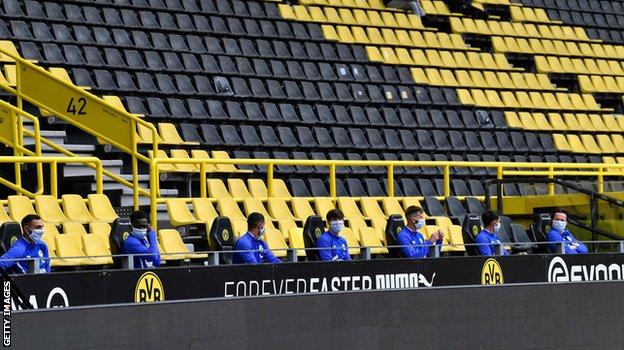 Could the way forward for football in England when it gets back to playing behind closed doors, consist of artificial crowd noise?

Well, daft as this may seem to some people, the English Football League is considering putting this to the Championship clubs, the majority of whom returned back to training on Monday.

One club, Bristol City are already discussing varying innovations at the club with Premier League Brighton also discussing the possibility of pumping crowd noise for their forthcoming games.

Already the broadcasters in Germany have offered the option of fake fan noise during RB Leipzig’s win at Mainz at the weekend, while Borussia Monchengladbach utilised 12,000 cardboard cut-outs of fans.

This begs the question, when the Championship along with the Premiership can get back to playing again? Albeit behind closed doors, do we really need the sound of fan noise pumped into an already empty stadium and cardboard cut outs as well?

Yes of course football will never be the same without actual fans at games, but remember we are currently living in a time when we must expect this practice never being seen again for a long time.

The thought of having artificial noise inside stadiums mainly to help the home side really isn’t working now. Take the Bundesliga for example. Since the restart of football in Germany, there has only been three home wins from 18 matches played. So, the theory of home teams having a big advantage even in games played behind closed doors simply doesn’t work.

Any games played behind closed doors offers a level playing field to both sides, and honestly, we don’t need pumped music, or fan noise during games along with cardboard cut outs of fans.

It’s certainly taken a little while for players to get used to the new experience of playing in front of empty stadiums, but they are used to it by now. They don’t need extra noise to improve their performances.

Fans will gradually get used to the sight of unfilled grounds with no noise. Unfortunately, it is a slow process of the way football is going to look for a long time to come. The message to football fans at the minute should be this, no noise and no actual fans at grounds is different, but in the present world we live in it has to be either this or no football played in front of anybody.

3 thoughts on “How can Home teams overcome lack of fans?”