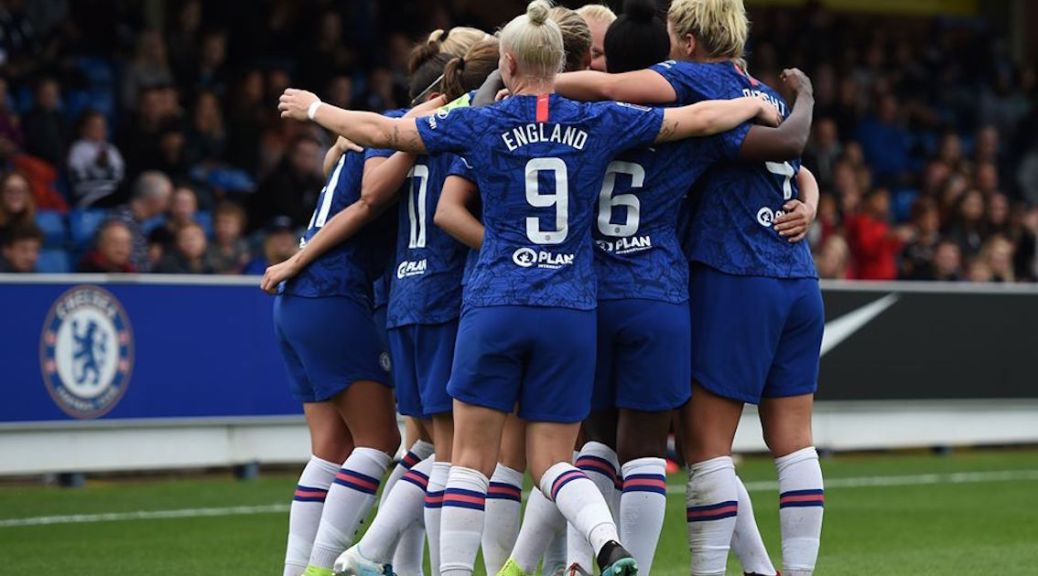 Indeed, WSL Champions Chelsea registered their first win of the campaign with a 9-0 win over Tanya Oxtoby’s Bristol City side.

Emma Hayes’ Blues were ruthless in front of goal in an impressive team display, which saw nine different goal scorers.  England International Fran Kirby opened the scoring with her first WSL goal for 16 months since returning from pericarditis.

Scottish winger Erin Cuthbert then ensured that Chelsea’s impressive performance continued as she provided the free kick for Melanie Leupolz to head home, before she scored herself from a long-range strike just outside the penalty area. Millie Bright then headed in the Blue’s fifth just before half time.

Things did not improve for The Robins in the second half as PFA Player of the Year Beth England tapped in from close range, before new signing Niamh Charles got in on the act by scoring on her first appearance for her new club.

Record signing Pernille Harder then opened her goalscoring account with an impressive backheel into the net before Australian international Sam Kerr completed the rout.

The other team to score nine goals past their opponents was Arsenal, who secured a 9-1 win over London rivals West Ham.

The match was selected as a test event for the reintroduction of crowds and the 734 fans certainly got their money’s worth.

The two sides were evenly matched in the first part of the game as Jill Roord put the Gunners ahead with a side-footed finish before the hosts equalised through a Kenza Dali half volley just outside the area.

The game, however, was effectively over as a contest when Hammer’s captain Gilly Flaherty was sent off just after Arsenal had retaken the lead through Dutch international Vivianne Miedema.

Midfielder Kim Little finished off a fine team move before England striker Beth Mead made it 4-1 to the North London side just before the break.

The second half saw further misery for the home side and their fans as Roord scored a further two goals to ensure she went home with the match ball for the second game running.

In between Roord’s goals Miedema was able to add another to her tally before Leah Williamson and Caitlin Foord completed the scoring, which saw the Gunners move to the top of the table, with two wins out of two and managing to score 15 goals in the process.

New signings Lucy Bronze and Alex Greenwood meanwhile were unable to inspire Gareth Taylor’s Manchester City side, who, were held to a 0-0 draw in their first home match of the campaign by a stubborn Brighton team.

The other side of Manchester, however, had no such problems as they achieved their first three points of the campaign away at Birmingham City.  Casey Stoney’s Manchester United were successfully able to overturn a 2-1 half-time deficit thanks to two goals from Kirsty Hanson, who inspired United to a 5-2 win.

Elsewhere, Reading were able to recover from a disappointing 6-1 opening day defeat to Arsenal with a strong first half display against newly promoted Aston Villa.  Goals from Amalie Eikeland, Laura Bruton and a Fara Williams penalty ensured The Royals of a commanding 3-0 lead at half-time.

Although a penalty from Stine Larsen 11 minutes from the end offered the midlands side a way back into the game they ultimately never looked likely to threaten to get back into the match.

The final WSL game saw Everton maintain their impressive start to the season with a 1-0 win over Tottenham.  The North London club were minus their new marque signing Alex Morgan, and ultimately did not offer much going forward.  Subsequently, they slumped to defeat on Merseyside, thanks to a header from England international Izzy Christiansen.

The Women Super League takes a two-week break with the next round of games being played on Sunday 4thOctober.

Before that though, the weekend of the 26/27thSeptember features Women’s FA Cup Quarter Finals, which includes a North London Derby between Arsenal and Tottenham. WSL Champions Chelsea, meanwhile, travel to in-form Everton, while Championship side Leicester City take on Gareth Taylor’s Manchester City.