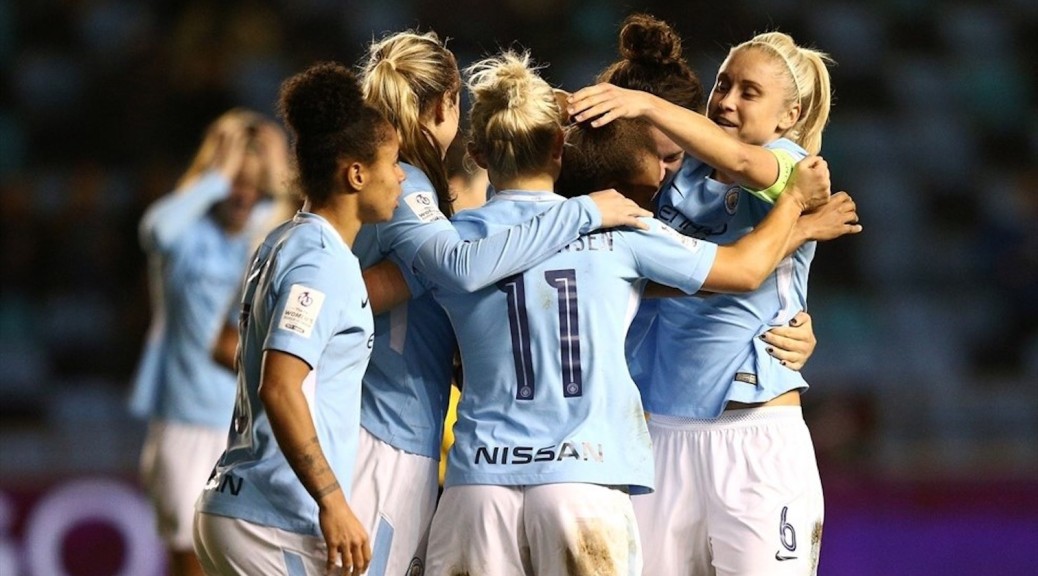 The game looked certain to be heading for draw until the Scottish midfielder was able to find the bottom corner.

City, however, did start slowly perhaps still feeling the affects of their mid-week efforts in Sweden where Gareth Taylor’s side were able to secure a 2-1 aggregate advantage in the Champions League.

Indeed, the Gunners were able to make their fast start count as the WSL top scorer Vivanne Miedema capitalised on some loose passing at the back by City and slotted a 20-yard shot past Ellie Roebuck with just three minutes on the clock.

City were able to level things up on the half-hour mark as the impressive American International Sam Mewis was able to head home a Chloe Kelly corner.

From there it was all one way traffic as City, who are unbeaten at home in 26 league matches were able to muster 16 shots on the Arsenal goal.  The efforts of Taylor’s side were eventually rewarded as Georgia Stanway’s blocked shot fell to Weir, who calmly curled in a low long-range strike.

“I thought we dominated the game, apart from the opening give minutes. It was similar to Goteborg in that we showed the strength of our character to fight back.

“I’m delighted with the girls and they way they kept going. It took us until the last few seconds to get what I thought we really deserved – for Caroline to produce a moment of magic.“

“That was my first goal this season,

“To be fair, I don’t remember too much about it! It fell right to me, I took a touch and saw a gap, and focused on hitting the target.

“Fortunately, it went in and we got the three points.

In the day’s early game saw Casey Stoney’s Manchester United extend their unbeaten start to the season thanks to a late header from Hayley Ladd against Reading.

The league leaders started the game in confident fashion and subsequently Leah Galton gave the Red Devils the advantage following a flowing counter attacking move and ended with Galton blasting the ball past Grace Maloney in the Reading goal.

The Royals did certainly made United work hard for their win and were able to draw level through a deflected shot from Jess Fishlock, which wrong footed the England keeper Mary Earps.

The winner for United, however, came from a corner seven minutes from time, which Ladd was able to head in giving Maloney no chance.

Sam Kerr makes the difference for the Blues

Australian international Sam Kerr proved the difference for the Blues to see off a stubborn Brighton team.  The Champions had to work hard for the win, but the victory ensured that they remained three points behind Manchester United.

It is also worth baring in mind that Chelsea do crucially have a game in hand over Stoney’s side and it was Kerr’s header from a Pernille Harder cross that ultimately settled the contest mid-way through the first half.

The Seagulls did, however, give Emma Hayes’ team a scare when Inessa Kaagman hit the bar following a neat turn and shot on the edge of the penalty area.

Alex Morgan scored her second penalty in a row as Spurs’ revival under Rehanne Skinner continued with a comfortable victory over Aston Villa.

Morgan put Spurs ahead from the spot in the 13thminute of the game after the American had herself won the penalty as she drew the foul from Villa keeper Lisa Weiss.

Nadine Hanssen, however, was able to chip in a terrific equaliser just 11 minutes later to restore parity.

The unfortunate Villa defender Caroline Siems was responsible for restoring Spurs advantage after she inadvertently turned in a Morgan low cross.

The win was secured mid-way through the second half as Roselle Ayane scored her first goal for the club with a deflected effort as the North London side clinched their second win in a row under their new manager.

Tanya Oxtoby’s Bristol City side were left four points from safety as West Ham were able to secure a comprehensive victory in a battle of the league’s bottom two teams.

The Hammers took the lead after Yana Daniels’ clearance ricocheted off Jemma Purfield’s into the City net.  The second half saw further goals from Emily van Egmond, England’s Rachel Daly, before Martha Thomas rounded off the scoring.

This result meant that West Ham moved back above Aston Villa into 10thplace in the table.