The Bundesliga will resume behind closed doors on 16 May, becoming the first European league to restart following the coronavirus shutdown.

One of the games of the day is the derby between Schalke and Borussia Dortmund, Which should be shown be shown live on BT Sport. Champions Bayern Munich, who are four points clear of Dortmund at the top of the table, travel to Union Berlin on Sunday. Most teams have nine games to play, with the final weekend of the season rescheduled for 27-28 June.

The German Football Association (DFB) said the season would resume under strict health protocols that ban fans from the stadium and require players to have Covid-19 testing. About 300 people, including players, staff and officials, will be in or around the stadiums during match days.

This come as good news for all football fans who have been starved off live football since March. The question is now Will the English Premier League and other Leagues across Europe follow Germany’s lead?

Germany has a lower death rate than the UK from the pandemic and Clubs returned to training in mid-April, with players working in groups. The prospect of the Premier League returning on the same date is minimal as players need to re-gain fitness however it may not be to long until it is resumed.

Prime minister Boris Johnson is due to address the nation with a new message at 7pm tonight (Sunday May 10th), the message is expected to be ” Stay Alert” rather than Stay Home, the message could be confusing but suggests lighter isolation restrictions which could in-turn mean they think it’s safe to allow football to return behind closed doors.

In worrying news Dynamo Dresden, who play in the second tier of German football, have put their entire squad and coaching staff into two-week isolation after two players tested positive for coronavirus. Bundesliga 2 is also due to restart on Saturday, 16 May. Elsewhere a third Brighton player has tested positive for coronavirus. Brighton players have been training individually at the training ground and the club say this will be allowed to continue. Premier League clubs are due to meet on Monday for more discussions about their proposed Project Restart plan.

Crystal Palace chairman Steve Parish says that unless Premier League clubs can find a way to stage matches soon, it may be a “very, very extended period” before the top flight returns.Speaking on BBC One’s Andrew Marr Show, Parish said that initial plans for league matches to be staged again from June may prove unfeasible.

“We would be derelict in our duty if we didn’t find a way to try and bring the game back,” he said. “It may prove beyond us.”

At least three clubs – Watford, Brighton and Aston Villa – are opposed to the plan to stage matches at neutral venues under ‘Project Restart’, while club doctors have raised concerns over aspects of the proposals.

A previous wave of 1,724 tests carried out last week by the Bundesliga returned 10 positive results.

“The German example could provide a blueprint for us and clearly we can see some of the early challenges,” added Parish.

Premier League chief executive Richard Masters has previously predicted a loss of “at least £1bn” if the Premier League fails to complete the 2019-20 campaign.

Parish believes that deciding the final league positions on the pitch, rather than relying on points per game or taking the current table as the final outcome, is preferable, even if conditions are far from ideal and this is something that I agree with.

Watching Football on TV even without crowds is something I am looking forward to in these times and Dortmund v Schalke is an exciting match to resume to.

Want to hear more about the return of football then be sure to watch our YouTube Podcast by clicking below.

Bayern Munich thrashed title rivals Borussia Dortmund 5–0 in Saturday’s Der Klassiker to reclaim top spot from their arch rivals. Described by many as the ‘biggest game in Europe’, Bayern swept aside Dortmund who led the table by 2 points before the game, with a ruthless display of attacking and fearless football and now lead the table by a point with 6 games left to play.
The visitors, who once lead the league by 9 points and looked set to prevent Bayern winning their seventh consecutive title, have seen their form dip in recent weeks and the display on Saturday showed they need to overcome a huge hurdle now if they still are to prevent Bayern winning their 29th Bundesliga title.

A lot was expected from the match, and Dortmund indeed started brightly with Mahmoud Dahoud hitting the post early on. However, once Mats Hummel’s header gave Bayern the lead, there was no looking back for the Bavarians. They lead 4–0 at the break, with goals from Lewandowski, Javi Martinez and Serge Gnabry adding to Dortmund’s misery.
And it was Lewandowski who completed the rout at the closing stages of the match, thereby also making him the first foreign player to score 200 league goals in German football.

But lets have a look at where exactly Dortmund got it wrong and Bayern prevailed.

This kind of defensive performance is not going to take Dortmund anywhere near the title, and the manager needs to get the balance right before the next game to keep their title charge on track.

As mentioned, Dortmund’s defense were under constant threat by Bayern’s immense press throughout the match and Nico Kovac’s tactics were spot on to lead Bayern back to the top of the table. The attackint quartet of Lewandowski, Muller, Coman and Gnabry won the ball back on multiple occasions in the final third. Their quick interplay and swift interchange in position gave Dortmund no time on the ball, causing them to concede possession in vital areas of the field. Bayern’s tactics didn’t allow Witsel or Delaney to link up with Sancho, Reus or Brunn Larsen, leaving the forwards very frustrated without any service for most parts of the game.

Nico Kovac’s Bayern side now have the edge to secure their seventh straight title, but any complacency might lead to Dortmund reclaiming the top spot again as there is very little margin for error during the business end of the season. However, one thing is for sure, the Bundesliga is all set for one of its best finishes in recent years and here on 24-7 football, we will keep you updated till the last chapter of the season is written and finished off. 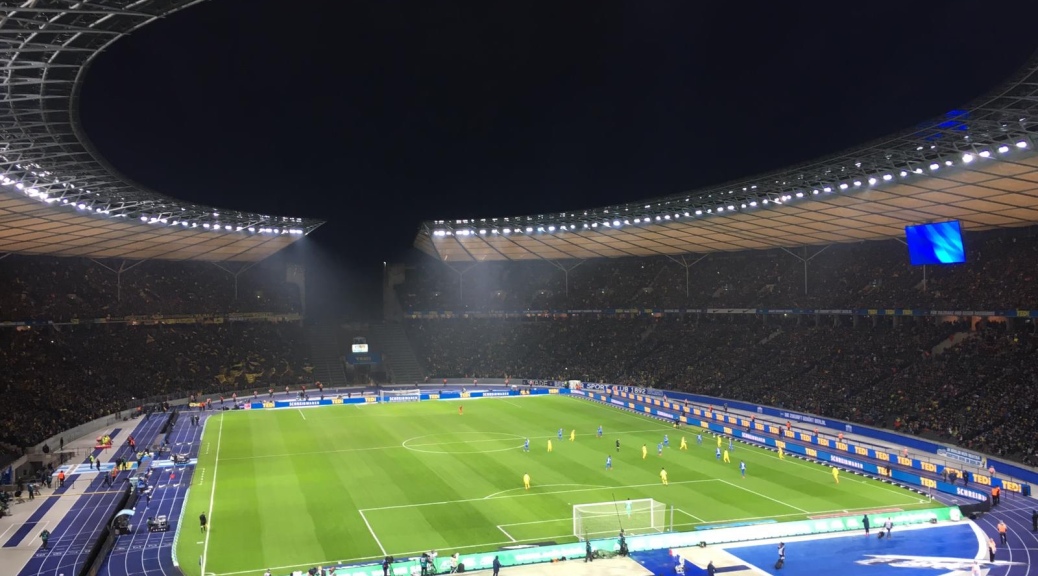 Hertha Berlin and Borussia Dortmund played out a thrilling match in the Bundesliga’s Saturday evening fixture.

Dortmund won the game after Marco Reus’s 93rd minute strike, but they twice fell behind to a resilient Hertha team.

The scoring got under way thanks to former Chelsea man Salomon Kalou pouncing on a Roman Bürki mistake after just four minutes. It only took 10 minutes for Dortmund to hit back after Thomas Delaney’s strike took a wicked deflection and bounced agonisingly into the net.

This sparked a period of pressure for Dortmund, but it was Kalou who scored next from the penalty spot to put his team 2-1 up before half time.

Dortmund flew out the traps in the second half, with Zagadou heading in an equaliser after 47 minutes. Almost the entire half consisted of sustained Dortmund pressure, and it felt only a matter of time before they scored the winner.

A flurry of chances were missed by the yellows, but it was Hertha who thumped the post after a quick counter-attack. Hertha’s task became even harder after defender Jordan Torunarigha was sent off for two yellow cards on 85 minutes.

Dortmund finally got the winner their play had merited when Reus swept in a cross from the left into the bottom corner, breaking Hertha hearts. In a foul tempered final few minutes, substitute Vedad Ibisevic was sent off for Hertha for angrily throwing the ball at Bürki’s head.

Whilst the action on the pitch was thoroughly entertaining, it was the action in the stands that I was most looking forward to seeing. Both sets of fans did not disappoint.

The Olympiastadion was a cacophony of noise. The main difference between a game in England and this game in Germany is that the chants and noise levels weren’t heavily affected by what was happening on the pitch. It was constant singing and jumping, regardless of where on the pitch the all was.

The Hertha fans were being led by a man down at the front with a microphone who seemed to spend the entire game facing his fellow supporters starting chants for everyone to join in with. The abundance of flags never stopped waving, and even when the winning goal went in, there wasn’t the same feeling of stress and aggression that you feel in English stands.

In the very rare moments that the lead fan kept quiet, you could hear the Dortmund fans at the other end of the pitch. This is deeply impressive considering the size of the running track surrounding the pitch and the very open stadium which allows noise to escape.

It’s common for the hardcore support for each team to be at opposite ends of the ground, and then the middle becomes quite mixed. This seems almost unimaginable in England as we create such a hostile atmosphere. When Dortmund scored, to me the two sides of the ground seemed to cheer louder than when Hertha scored.

Something that every fan would like to see at the moment is Jadon Sancho playing live. He didn’t perform to expectation in the first half, with Dortmund struggling to put together any real flowing moves. However, he was blistering in the second half. His movement was reminiscent of Cristiano Ronaldo at Manchester United, as he switched wings regularly, and also popped up down the middle on occasion. He was very unlucky not to score, and eventually got his rewards by setting up Marco Reus’s winner with a lovely outside of the boot cross.

A novelty I was very much looking forward to was being able to have a beer in the stand. There’s something much more friendly about the whole experience when you don’t feel like you’re constantly suspected of hooliganism. Something I didn’t realise was that people are also allowed to smoke in the stands. Either that or the stewards aren’t very vigilant.

It was quite incredible to watch a game of football in the historic Olympiastadion, looking across at a spot Adolf Hitler has made speeches from in the not-so-distant past. There is something quite eerie about the watching football in the stadium where black athlete Jesse Owens won four gold medals at the 1936 Olympics, much to Hitler’s annoyance. The stadium is quite something to look at and is easily accessible on the U-Bahn from the city centre.

There was an interesting moment of solidarity between both sets of fans, when Dortmund unveiled a banner saying “4 leagues, 4 champions, 4 newcomers. Regional league reform now”. This is a reference to the recent dispute’s fans have been having with the German Football Association. There was then a mutual chant by both sets of fans. I could only work out the words “scheisse” and “DFA”, but I could get the idea.

I can highly recommend going to see Hertha Berlin play live, especially given Hertha plan to move stadium by 2025.