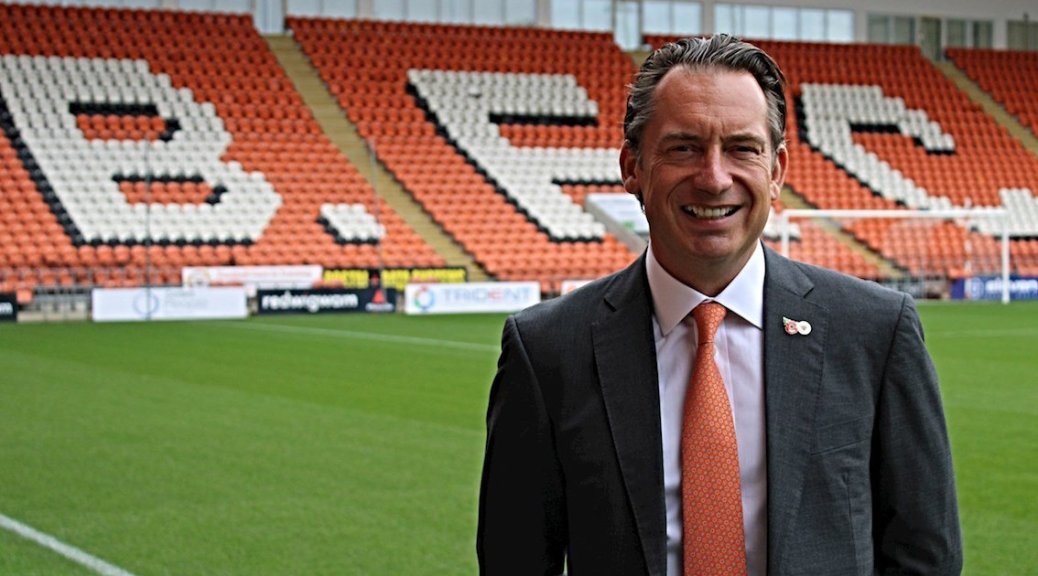 It’s safe to say that it’s been a tough year for all football fans after the sport was paused for three months earlier in the year, and ever since the majority of grounds haven’t had a return to supporters. But spare a thought for Blackpool fans who spent five years divided over the ownership of their football club. No sooner had they returned against Southend in March 2019, and COVID-19 put paid to the first full season under new ownership earlier this year.    After spending five years staying away from Bloomfield Road as part of a ‘Not a Penny More campaign’, Pool fans are now being forced to stay away due to the risk of COVID and instead forced to watch a new squad, under a new manager, via laptop at home. But there is still a feeling of excitement and optimism building – despite the fact the fans can’t show their support first-hand.

In June 2019, Blackpool-born businessman Simon Sadler bought a 96.2% share of Blackpool Football Club, much to the delight of Blackpool fans after many turbulent years of suffering through the Oyston ownership. The reign of the Oystons, which started in 1987, is commonly renowned for the Seasiders’ downfall from the Premier League down to League Two, in the space of four seasons. In what could only be described as one of the worst ownerships in football history, where the owners sued their own supporters, openly mocked others via text and gloated around the town with OY51OUT as his number plate, on the field the club suffered back-to-back relegations and failed to keep hold of its previously impressive squad, assembled by Ian Holloway. It caused much unrest and discontent throughout the fans, with the majority opting to stay away and refusing to give any more money to the owners. The Oystons were eventually forced to sell the club, after losing a high court case to Latvian businessman Valeri Belekon, a man who previously owned a share in the Tangerines and was found to be owed £32m in court.

Simon Sadler’s purchase was completed in June 2019, sparking scenes of jubilation across Blackpool and beyond, as fans looked forward to their long anticipated trip back to Bloomfield Road, with some having boycotted the stadium for upwards of four years. Sadler’s purchase allowed fans to feel like their club is finally in the correct hands, after so many years of division and unrest. Sadler proved to the supporters that he was the man to take the Seasiders forward from the start, by interacting, communicating and meeting the fans face to face, something Blackpool were not used to.

Sadler has not only brought financial stability to the club at the perfect time, but also security for the once suffering fans, in knowing that their club is safe and in the correct hands. The prospect of new ownership was, and still is, an extremely exciting one for Blackpool fans. In aid of pushing the Pool back towards the Championship Sadler has immediately made the Seasiders one of League One’s highest spenders in terms of outgoing transfer fees. In his first transfer window Sadler supplied newly appointed Simon Grayson with over £1m, a fee which was eclipsed this summer as the club brought in 17 new players to support the new manager Neil Critchley.

It’s not all been plain sailing so far – the return of Simon Grayson last summer was initially seen as a solid appointment, given he’d previously achieved four promotions from League One previously – including once with the Seasiders already in 2007. Unfortunately, Grayson’s return to Bloomfield Road mirrored his poor recent spells with Sunderland and Bradford City rather than the earlier success he’d seen. Grayson departed in February, having been considerably backed in the January transfer window, after a shocking run of just one win in 12 matches

By March, the new man was appointed in the shape of Liverpool under 21’s manager Neil Critchley. The then-41 year old was relatively unknown when appointed, having only managed at academy level with both Crewe Alexandra and Liverpool. But as one of only sixteen coaches worldwide to obtain UEFA’s elite coaching badge, he certainly has an impressive CV – though there were questions over whether he could do it at First Team level.

Just two games into his reign, the outbreak of COVID-19 curtailed the rest of the League One season. Rather than sitting and waiting to find out when football would resume, Sadler did not furlough his scouting team and work continued as the board and new manager looked to assemble a squad to compete at the top end of the table this season. That allowed the club to steal a march on its rivals with free agents at the start of the window, as Keshi Anderson, Marvin Ekpiteta, Oliver Sarkic and Ethan Robson all joined by early August. They were accompanied by Jerry Yates and CJ Hamilton for substantial fees in the current climate. Critchley cited the club’s ambitious, forward-thinking direction as one of the key factors that lured him into the managerial role.

There’s no doubt in saying that this isn’t an overnight process. Especially with an almost entirely new squad, that even today are still learning about each other’s strengths, weaknesses and attitudes. This has been reflected by the Seasiders’ bumpy start to the campaign, picking up just one win from their first seven league matches. But more recently, the new squad has started to find its feet and get to know each others’ games. Mistakes were made early in the season as the side looked bereft of cohesion and togetherness, but now they are improving each week in terms of performances and results. Those mistakes helped to shape the squad into a stronger unit as a team, and a force against any side in the division in recent weeks.

Ahead of Saturday’s trip to Fleetwood Town, the Pool have won eight of their last 10 games in all competitions, with the togetherness, unity and cooperation of the team playing a massive part in some impressive results – particularly against Peterborough and Portsmouth who are up at the top end of the table. Critchley’s fresh, exciting and attacking football that was talked about with the boss’ introduction has been evident, something that is an extremely exciting prospect for all Seasiders fans who have long dreamed of such a reality.

The main thing for now is that the fans have the club back. Sadler certainly came to the aid of broken Blackpool supporters after times of such misery and despair under the previous regime. It was a very dark period in the club’s history, and simply by walking through the door, the club was already in a far better place. But not only that, Blackpool have been able to really build on the feel-good factor by showing ambition already both on and off the field. The final piece to the jigsaw is for fans to return and show the appreciation to the new group of players first-hand. This was possible once this season after the Seasiders were involved in a pilot event at the start of the season, allowing 1,000 fans into Bloomfield Road against Swindon Town, and hopefully in the coming weeks this will be able to be built on.

These fans have never stopped fighting for what they believe in, and Sadler – who is one of them himself – has shown just how committed he is to the cause, and how much this town, and football club mean to him. It’s clear to see that Sadler certainly bleeds tangerine, and has allowed the fans to feel at home again at Bloomfield Road – restrictions permitting. With an exciting brand of football in the pipeline and off-the field developments starting to gain momentum, Sadler is rebuilding and galvanising a the football club which has a proud history. Together, the owner, board, players and staff – as well as the fans – are all striving to work together and get this great football club back to where it belongs. The future is bright, the future is tangerine!